THE PERRIN FAMILY: A BRIEF HISTORY

Born in Boston and raised in Summit, New Jersey, Nicholas (Nick) Perrin was first exposed to the Bible at age sixteen while attending Phillips Exeter Academy (N.H.), as he attempted to teach himself Greek by translating the Gospel of Mark. Curious about what he was reading, Perrin purchased a Bible and started reading through the New Testament in English.

As an English major at the Johns Hopkins University, Perrin continued to read the Bible. Soon enough Perrin found himself in his first Bible study. Over a year later, after attending an all-night fraternity party one Friday night in November, Perrin attended a Navigator conference in Annapolis, Maryland. There, in response to a gospel call from Bob Boardman, a career missionary working with Buddhists in Japan, he gave his life to Christ. Following his conversion, Perrin threw himself into the campus ministry at Johns Hopkins, sharing the gospel “with everything that moved.” In his final semester, Perrin felt God leading him to work for InterVarsity Christian Fellowship as a full-time campus staff member.

During this time, Nick spent several summers as a special student at TEDS, taking courses in Hebrew and the History of Christianity. It was also where he caught the bug for seminary. So by 1991, while working for InterVarsity part time, he attended Covenant Theological Seminary full time. Within weeks of arriving, Nick met his wife Camie at church. Originally from Mission Viejo (Calif.), Camie graduated with a BS in Elementary Education and took a teaching position nearby. After six months, Nick proposed to Camie in front of her first grade class.

After graduating from Covenant, Nick and Camie shared a busy and rewarding few years.  Nick became the assistant pastor at Naperville Presbyterian Church (IL) and after a few years and a now expanded family (sons Nathaniel and Luke), Nick pursued a doctoral degree in Bible at Marquette University. Three years later, they relocated to London, where Nick became the Research Assistant for the Canon Theologian of the Westminster Abbey (N.T. Wright), while also pastoring at International Presbyterian Church, West Ealing, London.

After London, the Perrins returned to the States. Camie homeschooled the boys; Nick took a full-time job as Assistant Professor at Biblical Seminary (now Missio Seminary) in Hatfield (PA), while also serving as a part-time chaplain at a Mennonite retirement community called Dock Woods. These were busy times, even in the off hours.

Eventually a Wheaton faculty member within the Bible and Theology Department invited Nick to apply for an opening at Wheaton College Graduate School, which he did and was offered the position. So the Perrins returned to Chicagoland in 2005. Four years later, Perrin was promoted to Full Professor and appointed as the Franklin S. Dyrness Chair of Biblical Studies.

While at Wheaton, he managed to author more than a dozen books, over four dozen essays or articles, over two dozen reviews, and nearly two dozen dictionary articles.

In 2010, Nick and Camie, together with two other core families, sensed God’s calling to start a Christian classical school in Naperville, Illinois. While Nick served as the Board Chair and Camie as the Head of School, Covenant Classical School realized an initial enrollment of 90 students with 40 percent being students of color. Under strong leadership to this day, Covenant Classical School continues to thrive.

Eventually, Nick stepped down from his role as board chair to become became Dean of the Graduate School at Wheaton, a role he held for five years.

Today, Nick and Camie’s eldest, Nathaniel, lives in Chicago and serves as the business manager for The Point magazine. Their youngest, Luke, is a senior Chemistry major at Westmont College in Santa Barbara. Nick and Camie have relocated from Wheaton to Lincolnshire, a six-minute drive from the Deerfield campus. Coming up on twenty-seven years of a wonderful marriage, they are excited about serving Trinity together. And they are also excited about what God has in store as God prepares to write Trinity’s next chapter. 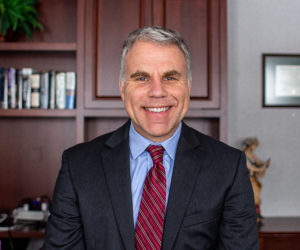 I’m honored to be the president of this fine institution that not only provides such a breadth of educational opportunity but also a deep, long-standing commitment to Scripture and helping students live a gospel-centered life. For decades, Trinity’s distinctive voice has been a gift to global evangelicalism. It’s my privilege to amplify that voice in a clamorous world that—now more than ever—needs to encounter the Word of God afresh in every area of life. And it’s my vision that Trinity accomplishes this through worshiping in faithfulness, mentoring in hope, and building bridges in love. We are living in uncertain times, and the past two years have been the most challenging I’ve ever experienced. Nevertheless, the dedication of Trinity’s students, staff, and faculty has been remarkable, adjusting to an ever-changing “normal” and seeking out ways to serve one another and our community at large. I give thanks for the Trinity family and the Lord’s sustaining grace. As we continue to prayerfully implement the wisest next steps on our journey facing a global pandemic into this Spring 2022 semester and beyond , one thing remains constant: our mission to “educate men and women to engage in God’s redemptive work in the world by cultivating academic excellence, Christian faithfulness, and lifelong learning.”

Our academic programs are designed to not only cultivate expertise in the fundamentals of various industries and jobs (from business, graphic design or communication to music, law, teaching, or full-time ministry) but to do so always with an eye on the integration of faith and work, to walk alongside our students as they learn to stand in the long line of Christian women and men who take seriously their vocations as callings. Spiritual formation is equally important to academic and professional pursuits. Our desire, then, is to develop and equip leaders who can respond ethically and with sensitivity to the demands of a globalized, knowledge-based society, for the glory of God.

As we lean into what it means to be a Christian university forming the lives of those who have come to us seeking to fulfill their educational goals, please continue to pray for our students, faculty, and leadership. I invite you to fully explore the blessings of being part of this enriching and welcoming community on our website and with a visit to campus! 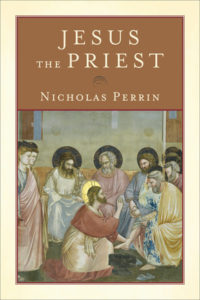 In Jesus the Priest, Nicholas Perrin offers a fresh paradigm for understanding the historical Jesus. He challenges the “standard reading” of classic texts (including the Parable of the Sower, the Beatitudes, and the Lord’s Prayer) to argue that Jesus primarily identified himself not as sage or prophet but as Israel’s eschatological high priest. As priest, Jesus claims to reveal God’s unchanging character through his own person and he announces the impending climax of God’s eschatological purpose, constituted by the arrival of the heavenly temple on earth. Jesus the Priest identifies Jesus’ priesthood as a mediating understanding that sheds crucial light on the kingdom of God.

Perrin’s insightful theological contribution synthesizes the best in scholarly reconstructions of Jesus’ life and teaching. It will be of interest to professors and students in New Testament courses, scholars, and anyone interested in theologically engaged historical-Jesus study.

Go here for a list of President Perrin’s selected publications > > >