TEDS Alumni Serving in the Dynamic Ministry of Navy Chaplaincy

With about 850 Navy Chaplains serving over 750,000 service members in the Marines, Navy, and Coast Guard, there is an increasing need for pastors and seminary graduates to minister to those in the military. As Navy Chaplains, alumni Jared Smith (MDiv ‘98), Jason Ragain (MDiv ‘06), Ronald Pettigrew (MDiv ‘96), and Matt Fisher (MDiv ‘05) have answered that calling and serve as pastors, missionaries, and counselors to service members in each of these U.S. military branches. 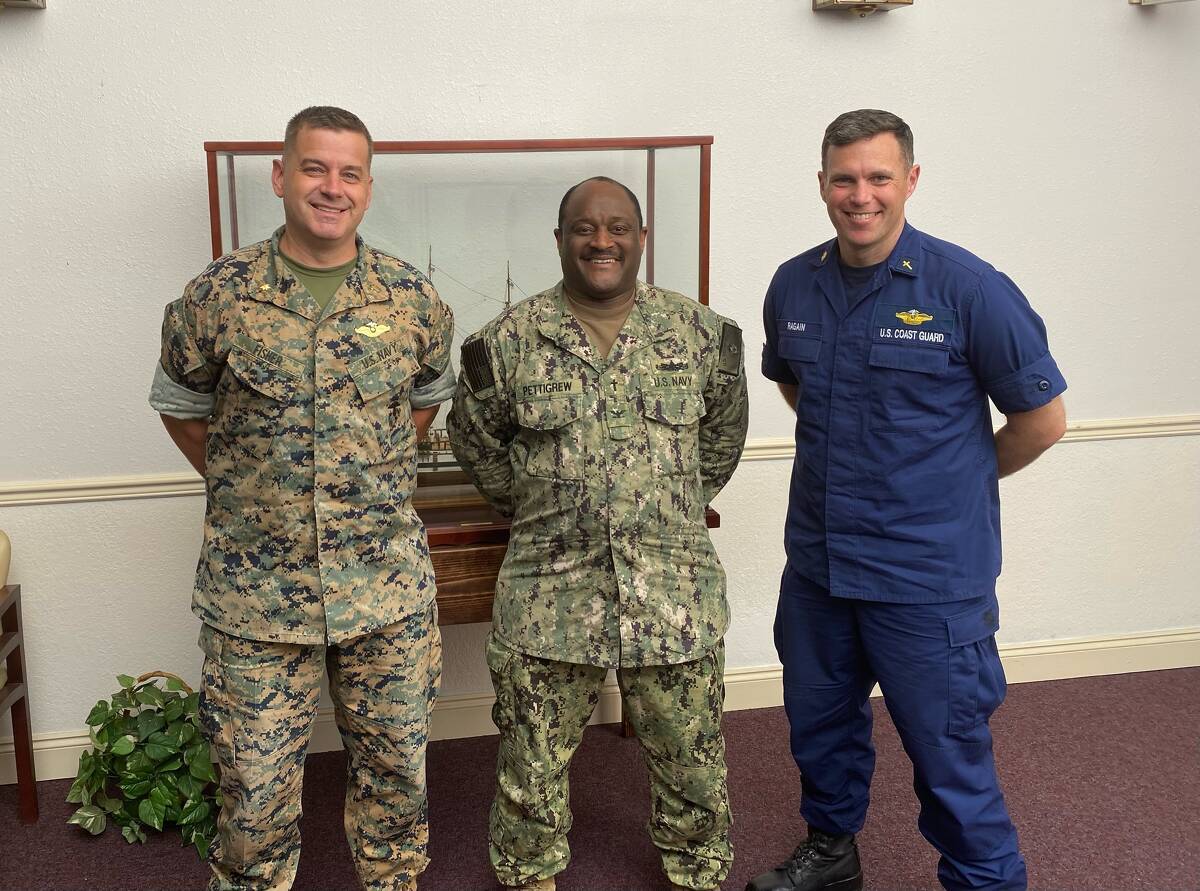 Lieutenant Commander Jason Ragain discovered his interest in becoming a pastor at a young age. Ragain grew up in a military family; his father was a Navy Dentist and has fond memories of the Navy Chaplains at each posting. When his neighborhood friend died in a freak accident, the chaplain on base supported Ragain, his friends, and his neighbors. That experience jumpstarted his interest in becoming a pastor. He said that like the Navy Chaplain on base, he just wanted to be there for people during the good times and the bad.

Jared Smith’s desire to become a chaplain occurred after he attended TEDS and served as Associate Pastor at the Village Church of Lincolnshire. While he loved his time serving the local church, he was looking for more opportunities to come alongside people on their journey to faith. “I wanted to minister to people who would never step foot into a church,” he explained. “As a Navy Chaplain, I’ve been able to do more one-on-one counseling in the first six months of service than I was able to in three years as a pastor.”

Role of a Chaplain

While each Navy Chaplain is ordained by their denomination, they are tasked with facilitating the religious needs of anyone in the military. “It’s our responsibility to make sure they can exercise their first amendment right— free exercise of religion— no matter where we are stationed,” said Ragain. Smith shared that the practical application of this is “listening to them about their religious practices and beliefs, securing resources about their religion or denomination, and in the case of marriages or religious ceremonies, connecting them with a local rabbi or priest and house of worship.”

Chaplains have absolute confidentiality in the military, meaning that they are not mandatory reporters. This allows members in the military to vent to them, share what’s on their mind, and receive counsel on anything they may be dealing with. “We are the one person in command who anyone can talk to about anything, whether that’s stress, anxiety, relationships with others, or something they want to get off their chest,” said Ragain. Chaplains specialize in proactive care and provide training on suicide prevention, stress mitigation, marriage enrichment, and working with different personality types.

As officers, chaplains also serve as advisors to the chain of command with regard to religious, moral, or ethical issues that the military may face.

“I left TEDS with a stronger relationship with Christ, a solid foundation in the Gospel, and a clear understanding of evangelical theology and its practical applications.”

“One great experience I had at TEDS was the chaplaincy candidate program, where I was able to put on the uniform, come alongside chaplains at the Great Lakes Naval Base, and learn from them in an internship capacity,” Ragain said. TEDS has a good relationship with the base which is just 12 miles north of campus. Ragain received practical experience and mentorship as he interned for alumnus Captain Ronald Pettigrew (MDiv ‘96), who was a Navy Chaplain on base.

During this internship, Ragain sat in on some one-on-one counseling sessions, did public prayers at the change of command, retirement, and other special events and ceremonies, and helped with Sunday chapel service by preaching, praying, and assisting the worship team.

“TEDS prepared me well for military ministry. I left TEDS with a stronger relationship with Christ, a solid foundation in the Gospel, and a clear understanding of evangelical theology and its practical applications.”

For Ragain and Smith, the counseling and pastoral theology courses they took helped them cultivate skills and tools which have made them effective at ministering to people in training and a one-on-one capacity. “The preparation here at TEDS really sets us up for success. The MDiv program is rigorous, and prepares us for ordination and a life of ministry,” said Smith.

Ragain is currently on his fifth active duty assignment as the First Coast Guard District Chaplain in Boston, Massachusetts. “When I look back on my time as a chaplain, I’ve been fortunate to do cool things and see neat places, but what’s going to stick out to me are the friendships I’ve made and the people that I’ve been able to minster to as they come to faith in Jesus Christ.”

Pettigrew, Ragain’s mentor and chaplain supervisor at the Great Lakes Naval Base, is currently serving as the Navy Reserve Deputy 7th Fleet Chaplain.

Fischer and Ragain were in classes together at TEDS, and Fischer is currently serving with the 8th Marine Corps District in Fort Worth, Texas.

Smith is currently serving three years as a recruiter to help inspire the next generation of navy chaplains. He says that they are increasing the number of chaplains in active duty. They currently have about 850, which seems high but is only about one chaplain per unit.

“There’s a huge need for ministers of the gospel in the military,” said Ragain. “There are a lot of people who are unchurched. They are hungry and just need some guidance in life, so anyone that is looking for a means to be a pastor, missionary, and counselor, becoming a chaplain might be the place God is calling you to.”

TEDS is grateful for alumni who are faithfully following God’s calling upon their lives In this case, that looks like providing the U.S. military with support, prayer, resources, and a daily example of what it means to be a follower of Jesus Christ, even in combat.

Talk to an admissions counselor today about how our MDiv program and our MA in Chaplaincy can prepare you for a life of service.