What in the World Is God Doing? 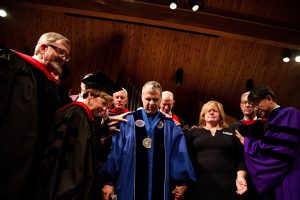 Trinity International University celebrated the inauguration of Nicholas Perrin as its 16th president with a ceremony on Oct. 24 that focused on one of the most famous of scriptural phrases, “For God So Loved the World.”

“Jesus broke bread with tax collectors and sinners, surely we can break bread with them too.” Such was the constant refrain couched at the end of President Nicholas Perrin’s inauguration address, titled “What in the World Is God Doing?” It was intended to drive home his main thesis—that the Gospel of John’s continuous thread throughout his story is that God so loved the world, after all.

We must love well, which undergirds our very mission at Trinity, Perrin said. “We are entrusted with the gospel, and we must also recognize that what is perceived as truth in today’s culture has shifted. So we must be not only excellent students of the Word but also of the world in which that message from God exists.”

In this way, Perrin said, we have the impetus for a robust Christian liberal arts education, which in turn blossoms into a more robust humanity. “That God so loved the world grants us greater academic freedom than any secular university, not least because we actually allow Jesus to enter into the classroom.”

In a day when discourse has devolved and logic and reason have been traded in for the alluring trinkets of soundbites and gossip, we must nevertheless hold the line on love. Faced with the temptation to either become entrenched toward our in-group or see truth as useful only insofar as it can be weaponized, we are called, on the contrary, to embody a love that is outward focused and welcoming to all Christians, and especially to non-Christians. Truth is not so much a weapon as it a liberator, Perrin said. Living into this way of being will clue us in to what God is doing at Trinity today.

David S. Dockery, Trinity’s 15th president and chancellor, presented Perrin with the presidential medallion, which is worn as a part of a president’s academic attire at ceremonial occasions. Also delivering remarks and charges were Phillip G. Ryken, president of Wheaton (Ill.) College, Shirley V. Hoogstra, president of the Council of Christian Colleges and Universities, Kevin Kompelien, president of the Evangelical Free Church of America, and Matthew Doede and Gretchyn Gordon, presidents of SGA and GSGA, respectively.

Several others took part in the ceremony and in the presentation of the symbols of investiture, which you can see detailed in the online inauguration program below: