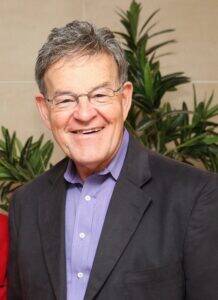 It is with heavy hearts that we announce the passing of Gary R. Collins (1934–2021) on Dec. 13. Gary was the founder of Trinity’s counseling program, when Kenneth Kanzer tapped him in the mid-1960s to launch the program at TEDS. It began with one course in the MDiv curriculum and grew into a department that offered its own degree.

Trinity quickly became the place to come if one wanted to take Scripture seriously for mental health counseling but not ignore the robust findings in other sciences. He was a champion of the ministry of the church and the implications of psychology for pastoral ministry.

“In short, our department lives in the legacy of Dr. Collins,” said Stephen P. Greggo, counseling department chair and professor of counseling. “I am grateful for his enthusiastic guidance during my 26 years at TEDS. He had a vision for the global church as well and encouraged our faculty to teach internationally and to welcome international students. In this his thinking was far ahead of his time.”

Gary was always a friend to Trinity’s counseling department, recalled Greggo. He was a frequent speaker at department events, and after any visit, he would often find a current student or two to dialogue with and build a relationship. The department also offers a Gary Collins award to a counseling student each spring.

Collins was a pioneer in Christian counseling. His vision was for the rebuilding of psychology through the lens of Scripture. He was an inspirational leader who forged the movement that is now Christian counseling. He was not afraid to tap into the best of what the social sciences had to offer because he had a solid foundation in robust Christian doctrine. His reputation is global.

Collins was author of numerous articles and almost 60 published books.

At Western he met his wife Julie. They were married in 1964.

They then moved to Minnesota where Gary taught psychology at Bethel College in St. Paul before heading to Conwell School of Theology in Philadelphia. A year later, Collins came to TEDS.

In 1991, after leaving Trinity, he assumed responsibility for co-leading the American Association of Christian Counselors (AACC). In the seven years that followed, Gary was its executive director and later the organization’s first president. During that time AACC grew from about 700 paid members to more than 15,000. In addition to these duties, Gary founded Christian Counseling Today, the official AACC magazine which he edited for several years.

Gary had an international platform, traveling to over fifty countries where he has given lectures and led workshops on Christian counseling, leadership, and Christian coaching. He had a small coaching practice and was the author of the People Builder’s newsletter/blog, and mentored many young, emergent leaders.

He is survived by his two daughters, his son-in-law, and two grandsons.