Still Entrusted with the Gospel After All These 125 Years 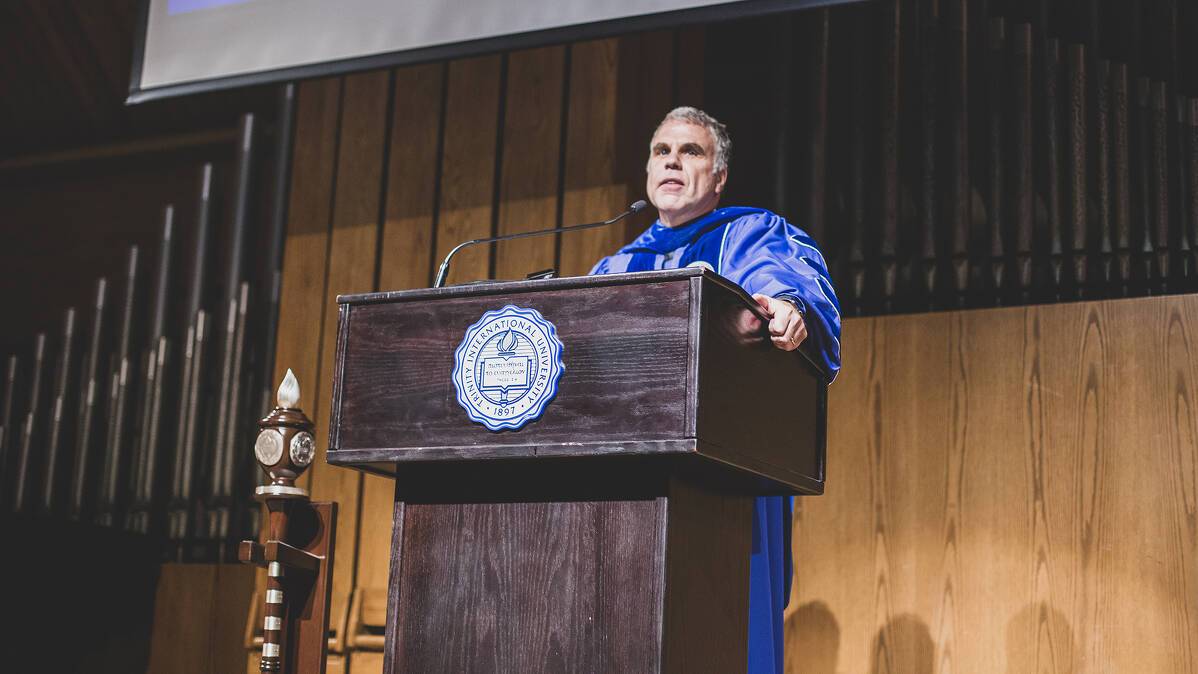 Trinity opened the 2022–23 academic year with Convocation today. President Nicholas Perrin delivered an address that encouraged and exhorted the Trinity community to hold fast to the center of the University’s mission—the gospel of Jesus Christ, the good news that the God of all creation is fulfilling his kingdom promises through the reign of his crucified and resurrected Son.

On the day when we put our faith in Jesus Christ, God invites us into his home, the kingdom, President Perrin said. By God’s grace we share in that grand story, which includes the calling to keep an eye out for those whom God is also inviting into his kingdom home.

In the 1 Thessalonians (1:4–2:4a) passage read during today’s ceremony, the Apostle Paul had a ready answer to the heavy question about when God’s kingdom promises would be fulfilled, which President Perrin paraphrased: “Now is not the time to linger on what happened but on what God was about to do in the future, and was even now doing in the present. Why? Because God through the life, death, and resurrection of Jesus Christ, and the message of this reconciliation through the gospel was already restoring the inheritance of creation by moving its rightful heirs—we, the people of God—into their eternal family home.”

Through the phrase, “‘entrusted with the gospel,’ we discover the culmination and climax of an intergenerational family story, the story of the people of God. And that story has been entrusted to us,” said Perrin.

But there is another family story Perrin talked about in today’s Convocation address. It’s a story that began around 125 years ago when a group of Swedish immigrant Christians committed to the power of God’s gospel met in the basement of a Chicago church for a 10-week Bible course, planting the seeds of what is now Trinity International University. Then as now, Trinity stands, entrusted with the gospel, as a place to educate men and women to engage in God’s redemptive work in the world by cultivating academic excellence, Christian faithfulness, and lifelong learning.

“There is a vital link between the gospel and education, faith and learning,” Perrin said. “In the end, those who don’t integrate their faith with their learning will not have a faith that matters, at least not to anyone outside of themselves. And in the end, those who do not integrate their education with their faith will have an impoverished learning.”

As Trinity educates students with the gospel at its center, the primary purpose of bringing God’s kingdom to bear on earth as it heaven begins to emerge, Perrin said. “If God has called us to be a part of a cosmic mission, which involves us joining him in refurbishing his house, filling it with all his children . . . then the primary purpose of a distinctly Christian education is to take back the house of the king’s inheritance.” 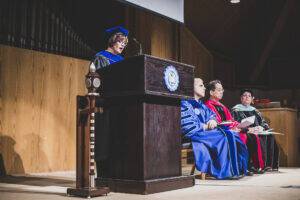 This was the simple charge from President Perrin to the Trinity community—students, faculty, and staff: Teach and receive your education through the lens of the gospel.

“We have been entrusted with the gospel since 1897, through all these years,” Perrin said. “The gospel tells us that God has called us to participate in his redemptive work, and whatever other enchantments possess us, may we never lose our enchantment with the story that God has saved us as and is even using us as instruments for saving a world for himself.”

May God find Trinity in another 125 years still entrusted with the gospel!

Prior to Perrin’s address, he led the official installation of Chief Financial Officer Paul Eisenmenger (who previously served in Trinity’s business office from 2002–2017), Vice President of Student Life Mark Muha, and Vice President for Strategic Partnerships Amanda Onapito (who has served in various Student Life roles at Trinity from 2014–2020).

See the entire address below: