A Castle for Ukrainian Refugees 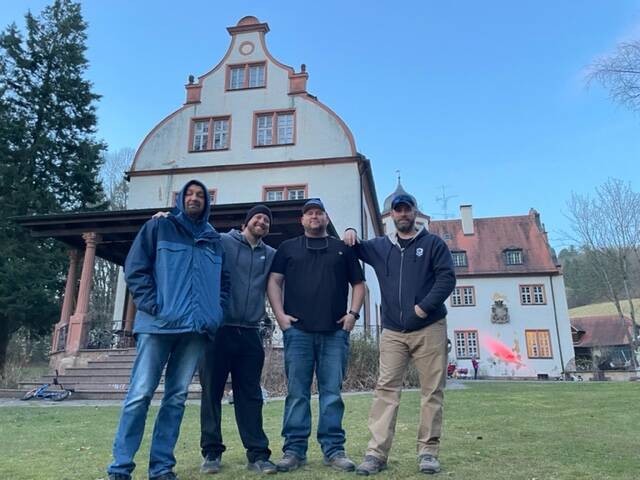 “The home to everyone is to him his castle and fortress, as well for his defense against injury and violence, as for his repose.” Edward Coke

“Every man deserves a castle; it doesn’t matter how big your castle is.” Big Narstie

Imagine sitting in class one week and flying to renovate a castle the next! That is what happened to Dan Laliberti, a psychology student in the dual degree program at TIU-Florida.

“One of our church’s pastors formerly worked in Europe, and he knew someone who had an old castle in Germany and was willing to lease it to our church to house refugees. So they sent over a crew of four of us to see what needs to be done,” Dan explained.

There were 23 Ukrainian refugees already staying in the castle when Dan and the team arrived, and that number more than doubled by the time they left a few days later. “People kept on coming—women and children,” Dan said. “We also sent a team to the border of Poland to help Ukrainian people get transportation from there to the castle in Germany.”

It was a busy trip, without much sleep for Dan and the team. “We hit the ground running, doing demolition at the castle, clearing out rooms, because we’re hoping to house 60-70 people there. As soon as we arrived, they handed me a chipping hammer to start working on the decay on the outside of the castle,” Dan said.

Then, something amazing happened. The whole German town started hearing about this castle that an American church was renovating to help refugees. “People started bringing things—clothes, toys, beds—every day local Germans were showing up to help! One person just came bringing food and Euros.”

“The Lord has definitely used [this experience] to draw me closer to him and sharpen me to be a more effective tool in his hand.”

The community rallied behind the project, and Dan’s team was able to pave the way for the next crew to do more construction work and renovation. In addition, Dan’s church is sending “teams of women who are specialists in dealing with trauma to do ministry” with those fleeing the fighting.

Dan says the refugees staying at the castle—all women and girls—have been through so much. Even when they finally made it out of Ukraine, people tried to trick them into human trafficking. But finally they have found a place of refuge.

Dan says he did not offer any special skills on this trip, but he was eager to help to serve hurting people. “I’m just a 34-year old man who was willing to do whatever needed to be done to help out,” he said. The needs will continue for the foreseeable future, Dan estimates, as refugees get settled into homes, and their children get schooling, in whichever country takes them in.

His studies and experience at TIU-Florida have helped open Dan’s eyes to the needs around him in South Florida, and to those thousands of miles away. “The Lord has definitely used it to draw me closer to him and to sharpen me to be a more effective tool in his hand.”