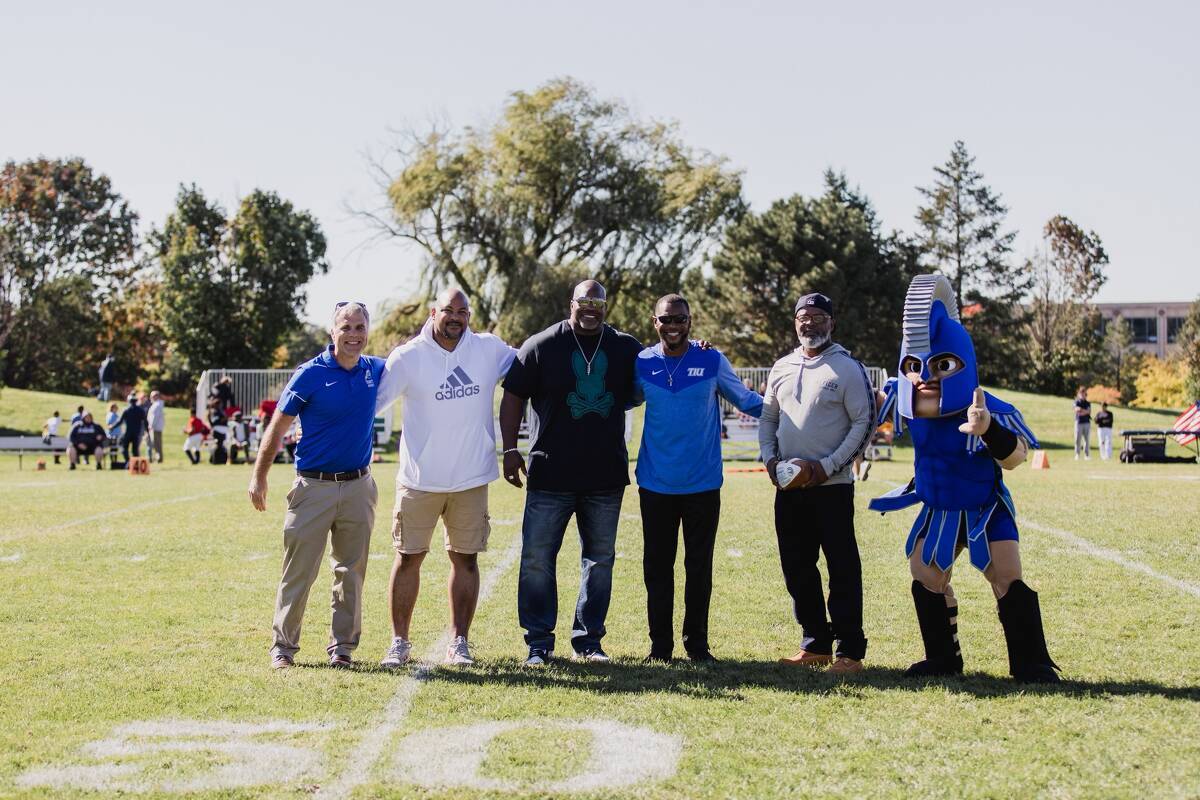 On Saturday, October 1st, the Trojan football family came together for an evening of recognition, celebration, laughter, tears, old friends and new beginnings. The annual Inside the Huddle event, hosted by Head Coach Willie Tillman, served not only to honor the legacy of the men who built up Trinity football with the opening of the program’s Ring of Honor and the induction of its first three members, but also to showcase the direction and mission of the program as a whole.

Tillman opened the evening with a word of prayer, noting the importance of prayer and prioritizing God to the program. He took a moment to recognize his mother, wife, and members of the Touchdown Club before setting the tone for the evening.

Chronicling the happenings of the season so far, Tillman didn’t shy away from the tougher points of what has been a trying fall for the Trojans. “If you’ve been following our program, you know that we’ve been going through a lot,” Tillman noted. 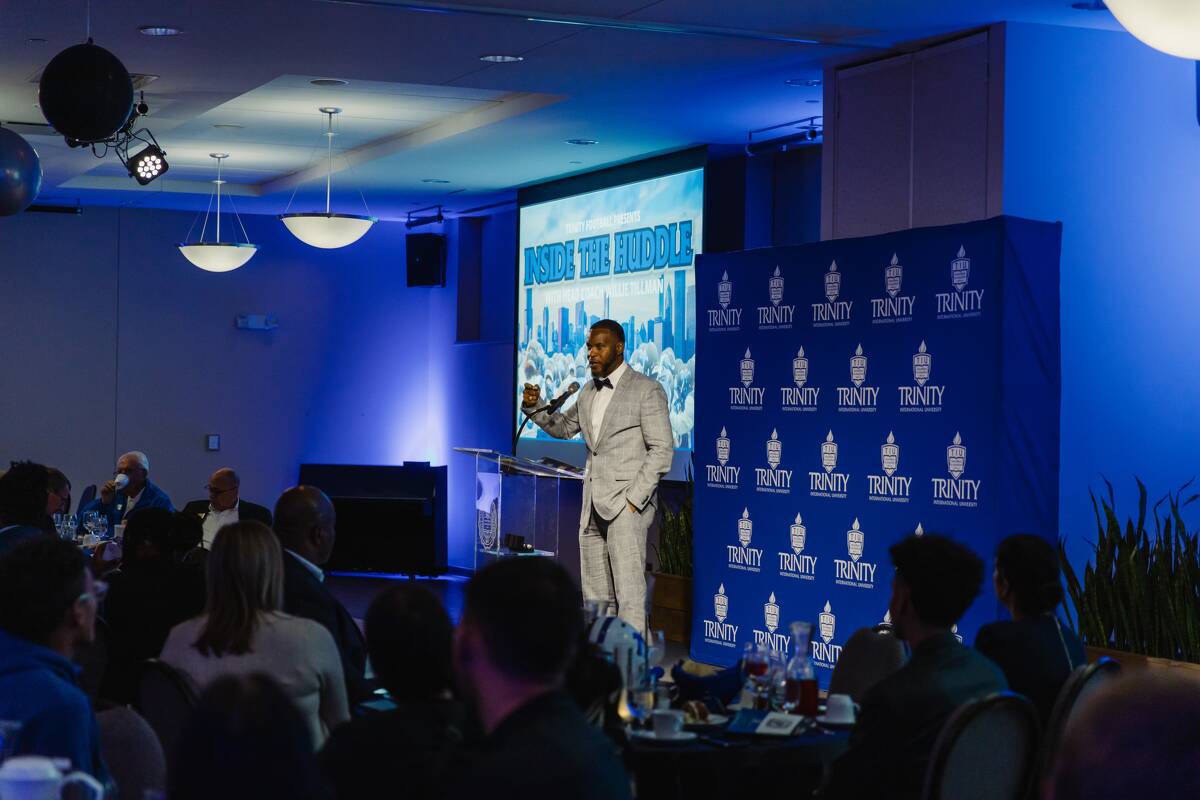 Of all the challenges the Trojans have encountered this season, none has been more difficult than the loss of freshman Wide Receiver Avery Gilbert, who tragically and unexpectedly passed away just a few days into fall camp. While Avery is no longer with us, Tillman made it clear that his mentality remains an inspiration to the team. “Live in the moment,” Tillman urged the crowd. “Whatever you do, enjoy it, because he did.”

After memorializing Gilbert, Tillman addressed another challenge the Trojans have faced, albeit one on a far lesser scale. The Trojans’ 49-7 loss earlier in the afternoon and their record so far this season.  While the Trojans haven’t been setting the world on fire with their play, Tillman made it clear that the program’s mission is far greater than the results it puts out.

After Tillman, TIU President Nicholas Perrin took the stand to offer a few words and lead into the upcoming ceremony. “When you have leaders who rise to the occasion…it is right for God’s people to recognize them,” Perrin said, referring to the Ring of Honor Inductees.

But before the honorees were recognized, one more key man in the history of Trojan football had a message to offer. Leslie Frazier, former Super Bowl-winning defensive back with the Chicago Bears and now defensive coordinator for the Buffalo Bills, was the head coach at Trinity when all three of the newly admitted inductees played for the Trojans. Frazier, after whom the Trojans’ home field is named, gave a heartfelt congratulations to his former players via a video recording.

“To see the men that they’ve become, how they represent Christ…is something I’m very thankful for,” Frazier said. “Congratulations to each one of them on an honor that’s well deserved.” 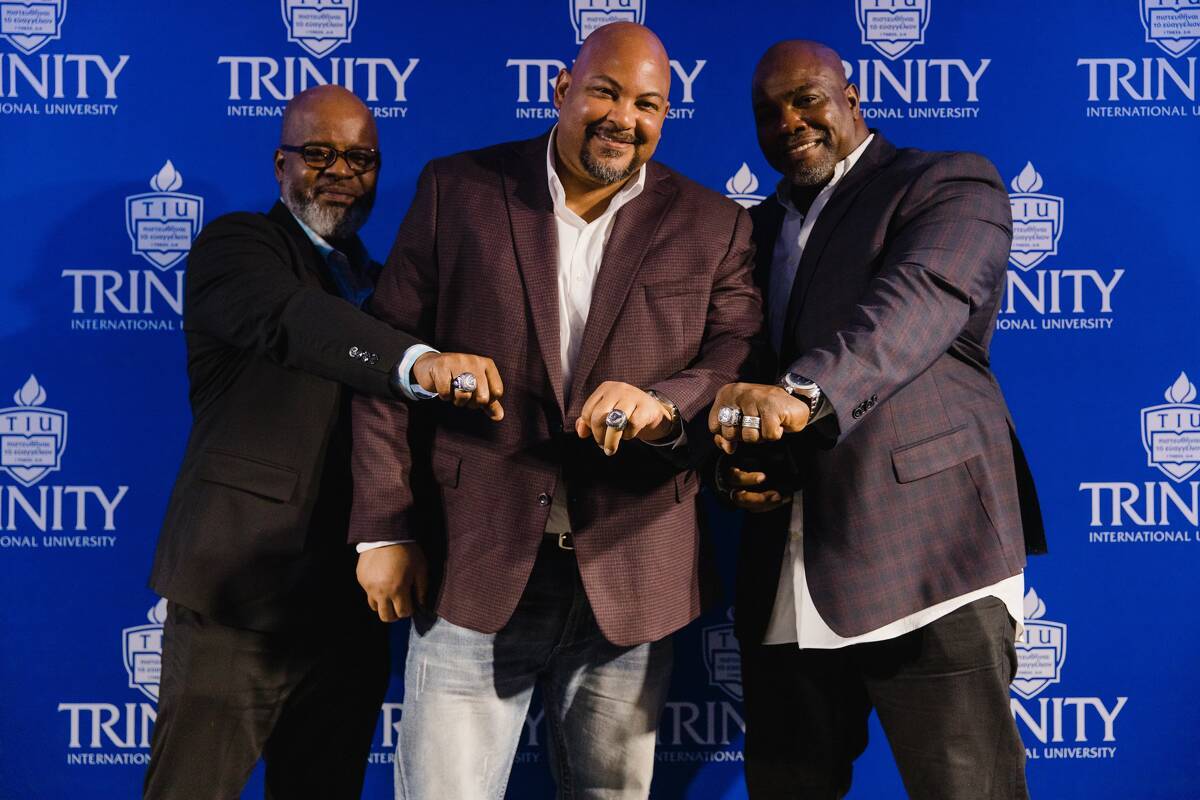 With the pomp and circumstance out of the way, it was finally time for the inductees to be honored. First, Coach Tillman introduced legendary Trojan quarterback Todd Johnson (Sociology ’94). Johnson holds numerous season and career records for the Trojans including most rushing touchdowns (55), most career points (330), tied for first in touchdowns scored (55) as well as second in rushing attempts (554) and rushing yards (3,272).

“I would talk about every single record he has, but we’d probably be here all night,” Tillman quipped before inviting Johnson to take the stage. “The thing he really has done for us is put Trinity on the map.”

Johnson’s speech was brief, yet passionate, showcasing the professionalism and intellect that not only helped him put up mind-boggling numbers as the Trojan’s star dual-threat quarterback, but has also led him to an incredibly successful post-football career, where he now works as a mental health therapist while owning his own business in that field, the Chicago-based Pillar Interventions, LLC.

“To achieve any award like this, it takes a unit, it takes a family,” Johnson said before urging his brothers to stand up and be recognized by the crowd. “I love this program. I believe I’m a Trojan in and out. We have a responsibility to the younger group, and let’s get this thing back on track,” Johnson closed.

Next up was Brian Martin (Computer Science ’94), a cornerstone of the early ‘90s Trojan defense who is primarily known not for bringing glory to himself with remarkable individual accolades, but for his selflessness, team spirit, and leadership abilities.

“It wasn’t about the stats,” Tillman said of Martin. “It was his leadership that stood out…and that says way more to me than just being a good player.”

Martin turned to his former teammates in attendance at the end of his speech, providing one more example of why they respected him so much. “Each one of you guys made me better,” Martin said. “I love you guys.”

Lastly, it was time to recognize Herb Coleman (Business ’95), a bruising defensive lineman who rode an outstanding collegiate career to professional stardom, becoming the first TIU Trojan ever selected in the NFL draft in 1995 before remaining in the professional ranks for a decade.

“He’s just a humble soul,” Tillman remarked of Coleman. “He’s an example of how you can come here and make it, in football, in business, and in life.”

Despite his relative stardom in the world of football, the significance of being recognized at his alma mater wasn’t lost on Coleman. “This is awesome, wow,” he opened. “I’m very honored, humbled by this opportunity.”

Coleman recalled the beginning of his collegiate football journey, the start of a whirlwind that would lead to a long and successful professional career. But it didn’t always seem like great things were in store for Coleman, even to himself. As a high school senior, he was simply a wide-eyed youngster with his arm in a sling, looking for an opportunity to play ball at the next level. That’s when then-head coach Leslie Frazier recruited him and gave him the chance that would set his destiny in motion.

“At this moment, I found somebody that believed in me,” Coleman said of the encounter, fighting back tears.“I’m sorry guys,” he added, “I’m an emotional dude.” The hall erupted into applause. Coleman continued to lay out his inspirational story.

“There’s some things that happened in my life I can’t explain,” Coleman said. “I’m not lucky, I’m blessed. I’m up here today, getting this [award], to let you know there’s opportunities out there for you, but you’ve got to start somewhere,” he concluded. “Every time I go forward, I turn around to see how far I came.”

With the festivities all but complete, Coach Tillman turned to his pastor, Pastor Mitchell, to close the night in prayer before dismissing the crowd.

The event, the first of its kind in the history of the Trojan program, served as a breath of fresh air in the midst of a trial-ridden season. Not only was the program able to recognize the giants of the past, it was also able to take their perspective and realize that championship level football is just one of the many goals in the lives of the young men participating in the Trojan program.

Perhaps Tillman summed it up best.“To grow our relationship with Christ is our number one goal,” he said.

You can support our TIU football team by joining their booster club:

Come watch the team at one of their upcoming games: