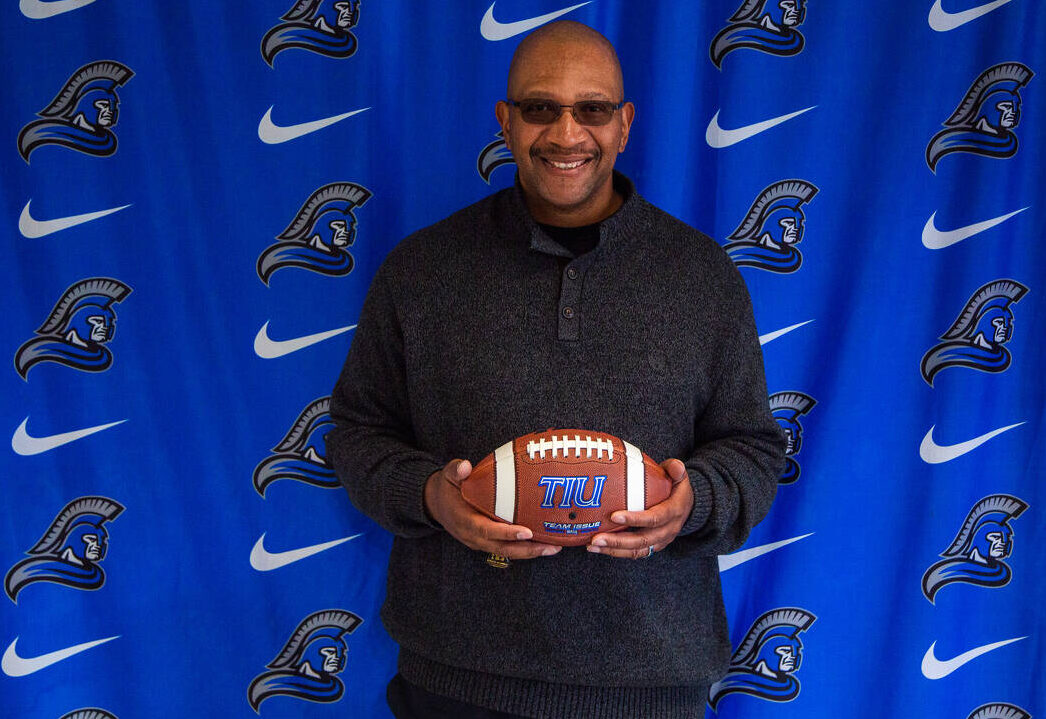 “Throughout the interview process, Coach Mills displayed professionalism, a clear vision, and strong values.” shared Acting Athletic Director Luke Ward, “Coach Mills is relational, humble, and brings a wealth of knowledge with him from his collegiate coaching career that will translate well here at Trinity. I’m excited for the future of TIU football and can’t wait to see him lead.”

Interim head coach Keith Otis stepped in following the season’s completion and the announcement that Coach Willie Tillman would be moving on. Otis joined the staff in the summer of 2022 as the offensive line coach. He will retain his initial title as Offensive Line Coach.

“It’s an honor to be chosen as head coach because people see value in me to lead the program,” stated Mills, “I feel as if Jesus guided me here, and I’ve been granted the daily opportunity to work with young men and impress upon them the values of hard work, respect, building relationships, and loving one another.”

Mills comes to TIU from Lafayette, Indiana where he served as Director of Player Development at Purdue University for nearly 18 months. His responsibilities included preparing student-athletes for personal, academic and athletic developmental success. Mills also brings a wealth of coaching experience, having coached at all levels of the NCAA, including building a program from the ground up for Division III Florida Atlantic University. Most recently, he served as assistant head coach, defensive line coach, and academics coordinator at Kentucky Wesleyan College from 2019 to 2021.

As a player, Mills competed four seasons for the University of Louisville (‘88-’92) as a defensive lineman under the leadership of Howard Schnellenberger. His senior year he served as team captain and at the end of his career was named the team’s Most Valuable Defensive Lineman, while ranking 10th in all-time sacks in program history. Following graduation in 1992, he returned to serve as the defensive graduate assistant to the Cardinals for one season before moving to another season as defensive GA at the University of Oklahoma.

In 1999, Mills was hired in his first full-time role as defensive line coach, once again working under Schnellenberger to develop the newly formed program. Mills was on staff for five seasons, including during the team’s first semifinal run in the NCAA Division I-AA playoffs in 2003.

Mills took on his first head coaching role in 2005 at Becker College in Worcester, Massachusetts after serving one season as assistant head coach and defensive coordinator. He was heavily involved in revamping the program after back-to-back winless seasons and aided the team to its first wins in 2007.

Since his first head coaching stint in 2005, Mills has served in a variety of other positions and locations, influencing the defensive line of high schools in Florida and Indiana, as well as the collegiate ranks at Franklin College and Kentucky Wesleyan College before his most recent role as Director of Player Development at Purdue University.

Mills laid out three concepts that describe his coaching philosophy: fundamentals, sticking together, and not flinching. He emphasizes the importance of doing simple things well, like communication and listening. And that loyalty to your team and family is crucial in moments of adversity, saying “when those things are taken care of, one can face adversity without flinching.”

“I’m excited to be at a Christian institution that has the same values as I do. I can coach on the basis of love and need to have Jesus as the cornerstone of your life on a daily basis,” exclaimed Mills, “that’s what really intrigued me about the opportunity at Trinity.”

Mills believes that how a coaching staff mentors their players is important, because “football will end but if a player earns their degree, that can’t be taken away from them.” Coach Mills places high value on academic achievement and spiritual development, and he will encourage his team to hold each other accountable, give maximum effort and total commitment, and have great pride in their coursework and extracurricular activities. His motto “As One” exemplifies this mindset. He says, “I don’t view this as my team, or my players, but I see all of TIU’s campus, faculty, and staff, as one big family. It’s OUR football team.”

Mills graduated from the University of Louisville with a degree in Police Administration and a minor in sociology. He will be moving to the Chicagoland area with his wife Brigitte and two dogs, Buster and Banjo. Mills loves his family who is his avid support system. He has two adult children, Imani K. and Mel T. Jr. In his free time, Mills enjoys playing video games, watching basketball or football, going on bike rides and eating his favorite food, chicken.

Support our TIU Football Team by joining the Booster Club, the Touchdown Club!