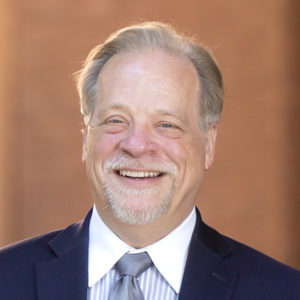 Trinity International University is delighted to announce the appointment of Myron Steeves as Dean of Trinity Law School after having served most recently as Interim Dean.

Steeves is a Canadian, born of missionaries to Ethiopia. He attended Biola University, and had a brief career as a missionary, focused on the Middle East. He realized that he wanted to provide administrative support to churches and ministries, so he attended law school, as he recalls, “almost on an impulse,” attending Georgetown University Law Center to earn a J.D.

Steeves worked as a business litigation attorney for the early part of his legal career. In his second year of law practice, he connected with Simon Greenleaf University School of Law, and started teaching there as an adjunct professor in 1992. Simon Greenleaf University merged into Trinity International University in 1998, which marked the start of his time working as a TIU professor. While working as a litigation attorney, Steeves continued to meet his initial goal in pursuing law by providing services to churches and ministries. In 2008, he stopped working as a litigator and founded the Church Law Center of California, a law firm that supports churches and ministries, political organizations and higher education. He continues to have a part-time affiliation with that firm.

Steeves moved from teaching at Trinity to the role of Dean of TLS in 2010, and has been in that position for most of the decade apart from three years in full-time teaching and most recently as Interim Dean.

As President Nicholas Perrin says, “In recent years Dean Steeves has led TLS to the top of its game. As a recent member of an accreditation team recently reminded me, he is truly an exceptional administrator doing exceptional work.” Provost H. Wayne Johnson adds, “In light of the important decision for Trinity Law School to pursue ABA accreditation, we believe that Dean Steeves is the ideal person to lead the staff and faculty on this road and continue to build TLS for the future.”