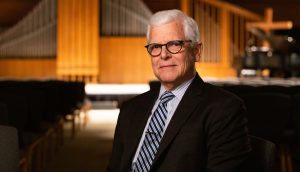 Gene L. Green, professor emeritus of New Testament at Wheaton College and Graduate School, has been chosen to lead the Trinity Florida campus as its dean, effective April 1, 2020.

Green, a Chicagoland native, brings 30 years of experience in theological education, as an administrator and as a faculty member. Before taking up teaching at Wheaton in 1996, he served for thirteen years in Latin America, spending much of that time working as professor of New Testament, dean, and rector of the Seminario ESEPA in San Jose, Costa Rica.

“Florida is only one of the fastest growing states in the union, but also one of most diverse states. As a scholar of no little stature and a seasoned cross-cultural—not to mention bi-lingual—administrator, Dr. Green is uniquely qualified to assume this significant role in the Sunshine State,” President Nicholas Perrin said. “We are delighted to have such a strategic leader in such a strategic space.”

“I am delighted to serve at Trinity with President Nick Perrin, my former colleague,” Green said. “We worked together for fourteen years and I relish the opportunity to cast the vision with him about the future of Trinity Florida.”

Green went to say how deeply grateful he is for the solid foundations laid for Trinity Florida since the 1990s and how excited he is to build on those as existing programs are strengthened and new ones are created.

“My first task, however, is deep listening to staff, faculty, students, alumni, ecclesial leaders, and church members in South Florida, hearing their stories and dreams. This is the primary work before blueprinting future plans.”

As an educator and administrator who has served for years in the USA and Latin America, Green comes to Trinity Florida with a set of experiences and visions.

“But there is wisdom on the ground, heart cries that must be heard, so the future will be one we construct together by the grace of God,” he said.

The author or editor of more than ten books, Green’s work centers on the intersection of Christianity and culture in the ancient world and in contemporary times, often with an eye on the question, how is the gospel understood within the mosaic of human communities? Most notably in this particular vein, he has served as editor (along with Stephen T. Pardue and K.K. Yeo) in Eerdman’s Majority World Theology series.

In addition to Spanish commentaries on the Petrine epistles and Thessalonian letters, his publications also include The Letters to the Thessalonians (Pillar) and Jude and 2 Peter (Baker). His most recent work, Vox Petri: A Theology of Peter, was published by Cascade in November 2019.

Green earned a PhD in New Testament Exegesis from the University of Aberdeen. He is married to Deborah, and together they have two daughters and two grandchildren (with one on the way).