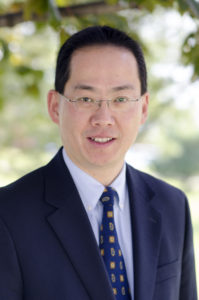 “Trinity Evangelical Divinity School is boldly ‘evangelical,’ where faithfulness to the gospel of Jesus Christ is the center of our study, our reflections, and our practices,” said Pao. “This gospel acknowledges Christ to be the Lord of all, one who demands worship and obedience in diverse social and cultural contexts. It is with utmost honor and humility that I take up the charge to serve as dean of TEDS.”

“Moving forward, as TEDS continues to bridge the gap between, on one level, scholarly expertise and practical ministry, and, on another level, Deerfield and the world, I can think of no individual who better embodies that much-needed but rare blend of academic prowess, pastoral experience, and global focus,” Trinity President Nicholas Perrin said.

Pao, a U.S. citizen born in Hong Kong (his parents were U.S. citizens who married in Chicago in the mid-1950s), brings more than 25 years of experience in theological education, both as an administrator (10 years as NT department chair) and as a faculty member (23 years as NT professor at TEDS).

Pao is an internationally respected New Testament scholar and a graduate of Harvard University (PhD, MA, MTS) and Wheaton (MA, BA). In addition to his scholarship and leadership, he is a committed churchman—he is an ordained minister in the Chinese Christian Union Church (Chicago)—having served in significant ministry roles while a professor. His preaching and teaching ministries are deeply appreciated around the world, as he makes around 20 (mostly international) trips every year. He is also on staff as a consulting pastor at two churches—one in Chicago and one in Toronto.

“David  Pao is uniquely gifted and experienced to lead TEDS into the future, equipping men and women to serve a diverse and global church for the sake of God’s redemptive mission in the world,” Provost Wayne Johnson said.

Prior to joining the faculty at Trinity, Pao taught at Harvard University as a teaching fellow in the area of Greco-Roman world and early Christianity. He has served as a visiting professor at several institutions in Hong Kong, China, Canada, New Zealand, and Australia.

Pao is also involved in a number of Bible translation projects, and he is currently serving as the New Testament editor of the Tien Dao Bible Commentary series (the first complete commentary on the Bible published in Chinese, with a total of 88 volumes) and consulting editor of the Zondervan Exegetical Commentary series. He has published a two-volume commentary on the Gospel of Luke, as well as commentaries on Colossians and Philemon.

He is the author or (co)editor of several books, including Acts and the Isaianic New Exodus, Thanksgiving: An Investigation of a Pauline Theme, Early Christian Voices: In Texts, Traditions, and Symbols, After Imperialism: Christian Identity in China and the Global Evangelical Movement, and Ascent Into Heaven in the Lukan Writings: New Explorations of Luke’s Narrative Hinge.

He has published ten volumes in Chinese, mostly in the Guides to Biblical Studies series (Tien Dao, 2015–). Among other projects, he is currently working on commentaries on The Pastoral Epistles (Brill Exegetical Commentary) and The Gospel of Matthew (Tyndale New Testament Commentary). He has also contributed to a number of essay collections and reference works, along with numerous journal articles and book reviews.

Pao has been married to Chrystal Ho Pao, also from Hong Kong, for 25 years. The Paos met at Harvard in the early 1990s when they were both graduate students, where Ho Pao earned her PhD in genetics. She went on to do post-doctoral research in neuroscience at MIT before joining the faculty at Trinity College teaching biology in 1998. Their twin daughters, Charis and Serena, are both in college.

Pao takes over the TEDS deanship from Dr. Graham Cole, who has faithfully served in the role for the past six years. Cole had previously served as Anglican Professor of Divinity at Beeson Divinity School (2011–2015), and before that taught as professor of biblical and systematic theology at TEDS from 2002–2011. Cole announced his return to his native Australia to serve as Emeritus Principal at Ridley College and to engage in other ministry opportunities.

“I am delighted at the appointment of David Pao,” Dean Cole said. “Not only is he an outstanding scholar in the field of New Testament, he is a humble, dedicated servant of Christ who is wise and immensely capable. TEDS is going to be in great hands.”