Not in the Temple but in the Fields: A Christmas Reflection from President Nicholas Perrin 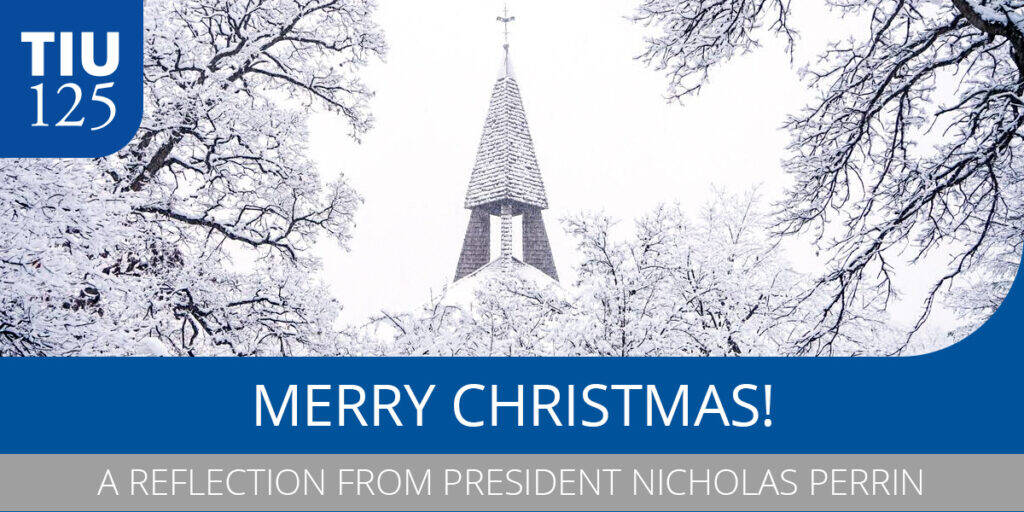 “And there were shepherds living out in the fields nearby, keeping watch over their flocks at night. An angel of the Lord appeared to them, and the glory of the Lord shone around them, and they were terrified. But the angel said to them, ‘Do not be afraid. I bring you good news that will cause great joy for all the people. Today in the town of David a Savior has been born to you; he is the Messiah, the Lord.’” (Luke 2:8–11)

On Christmas Eve, the night on which we celebrate the eve of Jesus’ birth, we are reminded not only of the extraordinary fact that our Lord entered the world but also of the extraordinary manner of that entrance. To say that it was entirely beyond human scripting would be an understatement. One might think that it would only be appropriate for Israel’s Messiah to be revealed in Jerusalem—and not just in Jerusalem but in the heart of it all, the temple. But that’s not the way God orchestrated it. In God’s wisdom, Jesus’ birth was to be rolled out in the most unlikely of places—in a field somewhere, far from the outskirts of town, frequented by nothing more than a band of very ordinary shepherds.

And almost like a science-fiction movie where the flying saucer softly lands on the earth with a blinding light, an angel of the Lord appeared to the shepherds and the “glory of the Lord” shone around them. Luke tells us that the shepherds were terrified at this experience. Can you blame them? You would be too. And yet there must have been a comfort in knowing that this shining light was not just any light: it was the glory (doxa) of the Lord. Needless to say, this was not what you would call an everyday experience. It was the experience of the century!

But actually no: when you think about it, it wasn’t even the experience of the century. Because prior to the first Christmas Eve, the last time God’s people saw the doxa of God, was roughly a thousand years prior when the divine pillar cloud filled Solomon’s temple (1 Kgs. 8:10), signifying of course that God was taking up residence in the temple. But the very last time that the glory appeared to anyone was in Ezekiel’s vision, when in a tragic and poignant moment, the divine presence forsakes the temple and heads eastward as if to accompany the eastbound exiles (Ezek. 11:23). That last sighting was centuries before the time of Jesus.

And now, centuries later, here they were—an epoch moment. After a long drought of the divine presence, the doxa was now finally at last reappearing. As it reappeared, it signaled that the exile was being reversed and that God was ready to take residence up with his people once again—and all this would somehow occur through this newborn baby, Jesus.

Again, the glory reappeared not in the temple but in the fields. Not where the high-powered influencers and the religious heavies hung out but where the marginal, non-influential and largely irreligious folk could be found. More than that, when God showed up on the very first Christmas Eve, he appeared not in the most centralized and most likely of places but in a remote spot and in the least likely of places. By introducing Jesus to the world in this way, God was announcing a new MO (modus operandi): from here on out, the doxa seemed to hint, God’s mission was to be characterized not by the pagans converging centripetally on sacred space. Rather, from now on God’s mission would occur centrifugally, with gathered, trained, and Spirit-filled people  being sent out, ever moving toward marginal spaces and remote frontiers. Call it God’s new missional principle.

For the past 125 years, by God’s grace, Trinity has been living in obedience to the shepherds’ vision. For 125 years, we have been sending out graduates—formal and informal shepherd-leaders called to ply their missional trade—so that they can effectively shepherd God’s people far and wide across the expanse of this globe. For the past 125 years, we have deployed alumni in every corner of the world, from Niles, Illinois, to the Nile River in Egypt, and in every nook and cranny of society. We send them out in order that they might relay the very same good news that the shepherds relayed on the first Christmas Eve: “Today in the town of David a Savior has been born to you; he is the Messiah, the Lord.”

On the night that Jesus was born, no one could have pre-scripted the story. When I contemplate the past 125 years of Trinity’s alumni and donors sustaining Trinity’s mission through their prayers, notes of encouragement, collaboration, and financial contributions, I dare say that no one could have scripted that story either. Sixty years ago, today’s campus in Bannockburn, Illinois, was all but an ordinary field far outside of town. But over those sixty years God’s glory has shown up here in glorious and unexpected ways—through our Trinity faculty, staff, and students, through people like you.

My dream for Trinity is that we continue to reach more and more shepherds willing to serve God in the most unpredictable yet missional of places. I believe it’s your dream too, and I’m glad that we share this dream together. When God wanted to get the word out about his newborn Messiah and Lord, he appeared to some shepherds in a field well outside the outskirts of town, knowing that they would run with the extraordinary news of the gospel. When God shows up in front of today’s shepherds-in-the-making at Trinity, I don’t think it’s going too far to say that he does so with God-sent angels in tow, angels like you.

Join us as we give thanks for God’s faithfulness to Trinity for the past 125 years and look to fulfilling the unique mission he has entrusted to us. Unite with the Trinity community for GivingTuesday on November 29 and help us raise $100,000 to support students across the University and continue our legacy of equipping men and women for God’s redemptive work in the world.

Give today—and help transform the lives of students at Trinity.