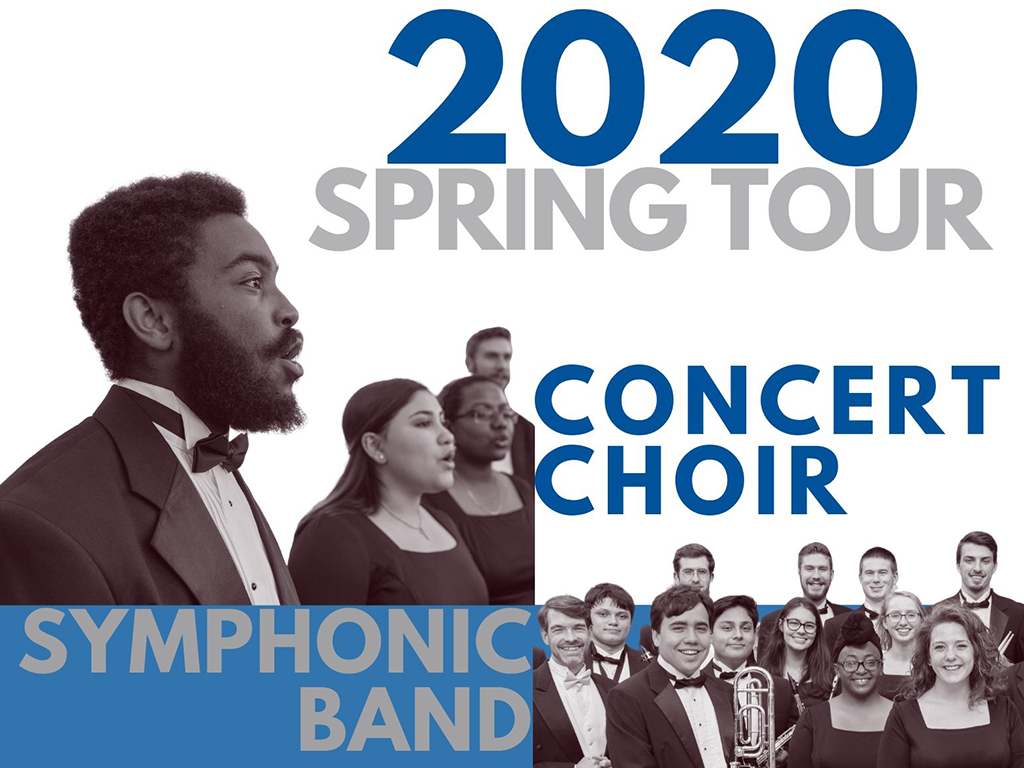 It is odd to feel genuinely nostalgic about something that occurred just this past semester. But such is the striking contrast between today’s reality during this pandemic and what was so recently “normal life.” As musicians in Trinity’s Department of Music, normal musical life is much more precious than we might have realized.

Our music ensembles go on tour over most spring breaks each year. This year’s tour took us through the Midwest, with stops in Rockford, the Quad Cities, St. Louis, Wichita, and Des Moines. The thought of being with 30 students in a bus for hours over several days seems so unhealthy now! As always, however, it was an enriching and life-giving opportunity to build relationships, create music, make memories, and be on mission with one another.

A few years ago we went on a tour to schools and churches nearby in Illinois and Wisconsin. In many ways it was a successful tour, but oddly enough the students were disappointed: We didn’t spend enough time together in the bus! This year’s tour had much more traveling (Who knew Wichita was nearly eleven hours away?) and much more opportunity for close fellowship. It’s that closeness that we all seem to crave–and lack–these days.

Our first stop took us back to Rockford Christian School where we once again were able to hang out with wonderful students and outstanding teachers in a thriving music program. Singing and playing with and for one another is always encouraging.

The hospitality was incredible when we stopped at Christ’s Family Church in Davenport later that day. It seemed most of the church came together to cook dinner and host us in their homes that night. The crew even returned in the morning to send us off with a great breakfast. Our concert was the first one of the tour – an experiment to see if all the rehearsal the band and choir had done mostly apart from one another would come together as we hoped. God clearly blessed our efforts much more than we deserved as we sang and played a powerful, upbeat setting of The Lord’s Prayer together in Swahili.

The next evening brought us to St. Paul’s Evangelical Church, an EFCA church with a rich history in St. Louis. We were delighted to visit a worship pastor there who had visited our campus in recent years. Our diverse assortment of music, from choral classics in German and Latin to contemporary worship songs, met the tastes of the wide age range of those in attendance.

After a stop at The Arch, we headed to Wichita where one of our own Trinity music graduates, Jeff Warren, so capably serves another EFCA church, First Free. Churches step out in faith when they allow us to participate in their services on Sunday mornings, and Pastor Josh Black was willing. Not only that, Pastors Warren and Black joined us as we attempted to play some bluegrass-ish worship! (We might have thought twice if we had realized that we were getting a bit too close to where the real stuff comes from.) We were truly blessed to have the opportunity to worship with this appreciative congregation.

En route back to Illinois we planned an overnight in a Des Moines hotel. It was our only night without a church host, but Music Department Coordinator Melody Velleuer worked her Salvation Army contacts, and we were invited to play a program in the Adult Rehabilitation Center to about 60 men in a residential program for various kinds of substance abuse. The students shone in their personal outreach to the men and gave themselves wholeheartedly to a program representative of the diversity of our tour repertoire. It was an eye- and heart-opener for many of the students; it was touching to see the men and staff warm to our musicians.

Our final concert took place at Fairhaven Christian Retirement Center, where we were the event to be at. Apart from our performances on campus, no where else do we run into so many Trinity alumni in one place. We also had a special opportunity to connect with former band director George Strombeck, who led the band in two pieces based on trains – so fitting for this octogenarian train enthusiast.

After returning to campus, we met again early the next morning for one more ministry at Christian Heritage Academy in Northfield. Our students sang and played with the upper grades choir and band in the all-school chapel, presented some of our tour program, and shared testimonies.

Little did we know that would be the final public performance of the 2019-20 school year! One week later students and faculty were sent home, from where we have now finished the semester. We give thanks to God for the times we spent close together making music for others. We look forward to the promise that we will do it again, Lord-willing here, but definitely throughout eternity!