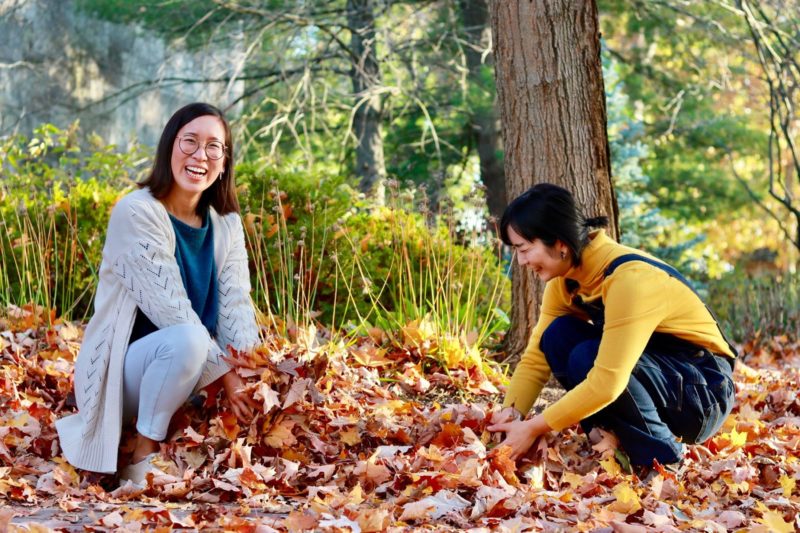 In late 2017, the prelude to a deep-rooted friendship flickered into existence. From Okinawa, Japan, a young woman began her Master of Arts in Theological Studies online at Trinity Evangelical Divinity School. A year later in Berlin, Germany, another young woman, yearning for solid biblical education options, started searching for seminaries in North America. The stage was set.

After taking a gap year to study in China, Hanna Kim returned home to Germany in 2018. She knew she wanted to attend seminary and promptly began the search, spending all of her savings on applications. But after time passed with no replies and the new year arrived, she decided it was time for a backpacking trip. The trek would take her through eight countries, beginning with Singapore in January and ending with Korea in March, where the internationally known Lausanne Movement would be hosting a conference for young leaders.

Kim set off on her 8,000-mile journey with no money and no food. For three months, she lived and traveled in the unknown, never sure of where she would be staying or what she would be eating the next day. People she encountered along the way provided her with food, rides, and places to stay. During her travels, one of the seminaries she had applied to, Trinity Evangelical Divinity School, reached out. She took the next steps of the application process thousands of miles away from home. One section included a Skype interview, and Kim’s location provided poor internet connection. She worried that it had made an equally poor impression, but continued on.

The last day of her trip arrived, and Kim was just about to take a ferry to her final destination when she received an international call. It was TEDS. Their news? She had a full-ride scholarship.

“That’s when that year just became clear. I knew TEDS was where God wanted me to be,” she remembered.

Kim had arrived in Korea in the nick of time for the Lausanne conference. While onboard an airport shuttle to her hotel, she struck up conversation with another woman. She had no way of knowing it at the time, but the connection they forged in that small shuttle would stretch for thousands of miles and impact both of their lives for years to come.

“We’ve been praying that God would not just give us head knowledge, but transform our hearts to die to self and to know the worth of Christ.”

Moe Higa was not satisfied. As a Christian new to the faith, she wanted more—more teaching, more fellowship, and more growth. She had previously left her hometown of Okinawa, traveled to the United States for college, and came to faith there. When Higa returned to Japan, she experienced a sort of Christian-atmosphere culture shock. She struggled to adjust to Japan’s church culture, which, unlike America’s, did not include constant questioning.

A year and a half after her conversion she became involved with the evangelical ministry Kirisutosha Gakusei Kai (KGK), the Japanese equivalent of InterVarsity Christian Fellowship, as a staff member. Brimming with questions, Higa enjoyed the fellowship it brought. She took every opportunity to dig deeply into Scripture.

“I was looking for a place where I could actually ask questions and study the Bible,” Higa explained. “I was craving this community where I could talk about faith, wrestle with the text, and simply know God more and be equipped to serve.”

She had completed her undergraduate work at Beloit College in Wisconsin and decided the United States was a good place to continue her education. She looked into a number of seminaries, but to her dismay, there was no personal connection. Then she found Trinity Evangelical Divinity School, which came highly recommended from her mentor, and the doors finally felt wide open.

In the fall of 2017, Higa began her MA in Theological Studies at TEDS. She remained in Japan and took the classes online. Her intention, from the beginning, was to switch to a Master of Divinity once she was two-and-a-half years into the program.

A little over a year later, Higa decided to head to South Korea for a Christian conference geared toward young leaders. Once she was nearly there, she boarded an airport shuttle to her hotel and connected with a fellow passenger. Names were exchanged, then destinations, and finally future plans.

“We immediately bonded and started talking,” Higa remembered. “We sat next to each other and were sharing life. We were kind of tearing up even before the start of the conference.”

Both Higa and Kim were headed to the Lausanne conference in Korea that week. Both were going to America in the fall to study at TEDS. And both had just begun a once-in-a-lifetime friendship.

Moe and Hanna at TEDS 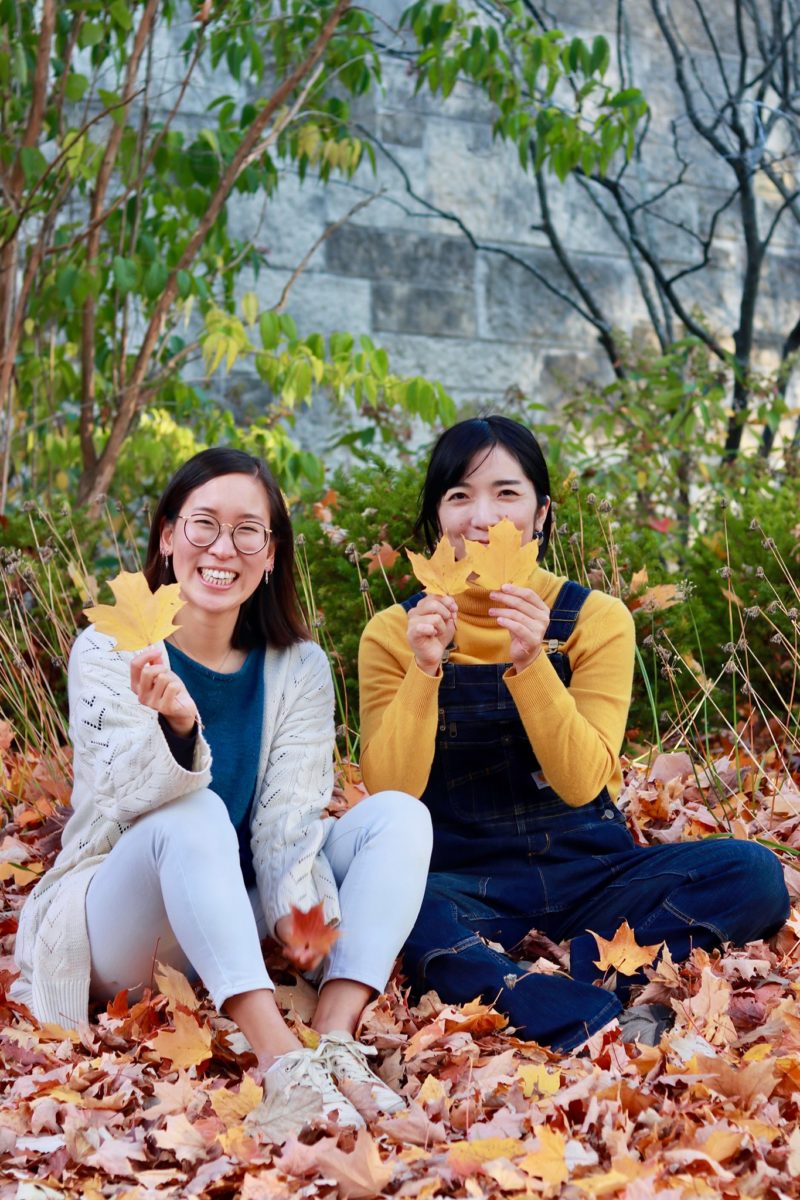 Once at TEDS, the pair took joy in simply experiencing life together. Through the ups and the downs brought by different semesters, they lived together, studied together, and practiced spiritual disciplines together. Most importantly, they grew together.

From the beginning of their studies, both women committed to strengthening their relationships with God. Before the start of their first semester in person, the two lifted up a surprising request to the Lord. They asked God to make their time at TEDS difficult.

God, we don’t want it to be easy and nice, but instead we want this time to refine us as followers of Christ. Please destroy all of our idols and reveal all of our depravity and show us our need for grace and renew us as your disciples.

Their request was granted. Over the next several months, Higa and Kim deepened their relationships with God both inside and outside of the classroom. Individually and together, they developed their faith far beyond what it had been prior to their arrivals on campus.

“We prayed that prayer at the beginning of the first and second semesters, and we went through a lot,” recalled Higa. “We cried a lot. We learned to confess, we learned to forgive each other, and I don’t think we have ever had that close of a relationship with anyone else in our lives so far. It was painful, it was, but it was so good, because God was transforming us.”

But pride remained a regular obstacle for them both. In seminary, pride took several different forms, such as seeking approval from people over God, wanting to become well-known, or taking validation from academic credentials rather than Christian identity. The first step for them turned out to be seeing and recognizing their blind spots with humility. Both Higa and Kim agreed that they see theirs more often as a result of being roommates.

“We’re falling short of God’s glory. We see it all the time, in each other and in ourselves,” said Kim. “But God doesn’t give up in those moments. He uses them. There’s definitely a lot of sanctification that has happened since we came here. I’m kind of terrified but also excited that God is going to keep doing that in the next semesters that we are here. He has his own curriculum, and we’re just conforming to it.”

Higa agreed. “I praise God for that. We can see his work in each other, and it’s really encouraging,” she said. “I cannot thank God enough for this friendship that he gave us.”

“There’s definitely a lot of sanctification that has happened since we came here. God has his own curriculum, and we’re just conforming to it.”

Taking deliberate time to cement spiritual disciplines has become their most recommended practice. Even when student life is busy and coursework piles up, this remains of the utmost importance.

“If you get out of seminary and you haven’t learned to pray or to seek God’s silence in his Word every day and nourish yourself, then all the head knowledge you gained is worth nothing. So protect the time you spend with God,” suggested Kim. “Take time to cultivate habits of spiritual disciplines, because if you don’t deal with it now, you’re never going to do it.”

Higa and Kim began setting aside time every evening to pray in the chapel, and after a few weeks it became a habit. When they are faced with difficulty large or small, their first instinct is to turn to God in prayer. Before nurturing that pattern, Hanna said, prayer did not come as naturally to her, and she now counts it as her biggest gain from seminary.

Currently second-year students, Higa and Kim are unsure where the Lord will lead each of them after graduation. In the meantime, they take satisfaction in continually preparing for cross-cultural ministry. They learn languages from each other and both share a dream to revitalize theology for their cultural contexts, rather than to adapt Western theology and risk producing material that is irrelevant or simply uninteresting to Asian Christians or seekers.

“Theologians here answer questions that Western people are raising, but if Asian people are not raising these questions, then having those answers translated doesn’t help them. We’d like to start with Asian questions, the things that are going on in the heart of the Asian person,” explained Kim.

Both students have hearts for East Asia. In Japan particularly, many remain unreached with the gospel, and among East Asian countries in general there are many layers of social and religious division. Still, they remain determined and firm in their desires to serve Christ.

“For Christians as peacemakers, there’s a task that’s waiting there,” Higa said.