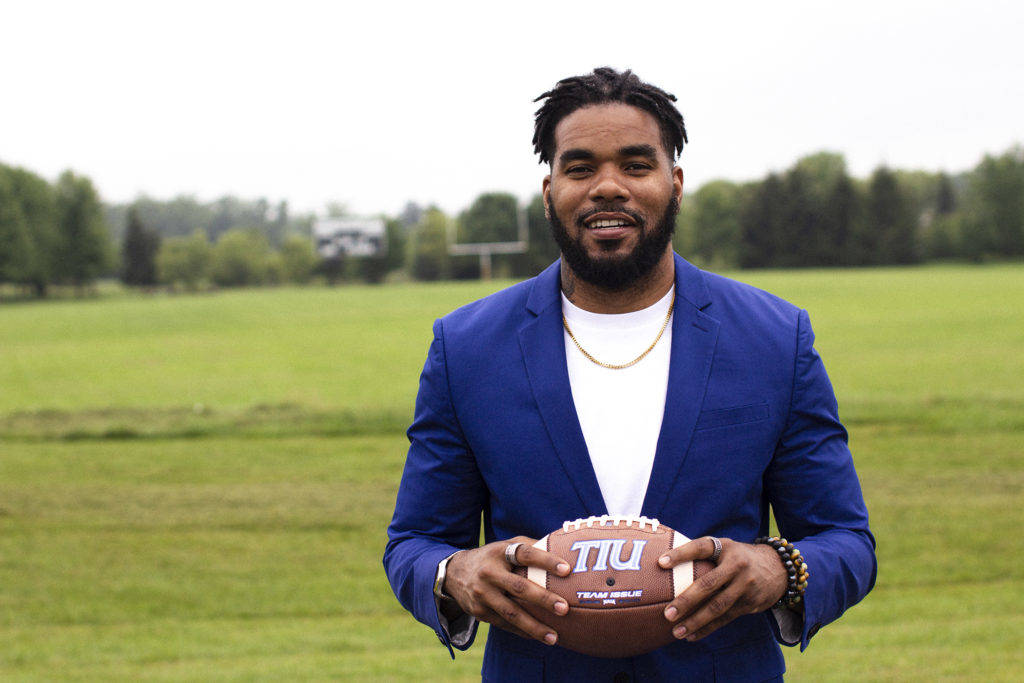 TIU’s new Head Coach Willie Tillman added to the football coaching staff as his first order of business, with the hiring of Quintin Demps as assistant coach/defensive secondary on July 16. Demps is a former NFL (National Football League) safety and kick returner.

“Coach Demps comes to Trinity with a wealth of experience and knowledge from playing 10 seasons in the NFL,” Head Coach Willie Tillman said.

More importantly, for Coach Tillman, Demps shares the same vision he has for the Trinity football program.

“He wants to see young men grow in their faith, help them excel academically, and win football games. His passion for mentoring young men is a true blessing for Trinity International University,” Tillman said.

“It’s an honor to join the football coaching staff at Trinity, a place where you can give back, teach players, and disciple them to the glory of God,” Demps said.

Meeting players for the first time in the locker room, Demps knows that everybody comes from different backgrounds and upbringings, “but what brings us together is our love for Jesus as well as wanting to win ball games,” he said. “To me, faith and football go hand and hand—learning how to sacrifice, how to be disciplined, and how to maintain integrity on and off the field.”

Demps said that when he first met Coach Tillman they gave each other the biggest hug. “It just showed that the Spirit of God was in the room. He’s a solid dude, a great leader, he loves his players, and he loves football! I’m excited to work for him and with him.”

During this past pandemic year, Demps coached track and football as defensive coordinator at Grayslake High School (Ill.).

Demps played Division I college football at Texas-El Paso, and was drafted by the Philadelphia Eagles as the 117th overall pick in the fourth round of the 2008 NFL Draft. He went on to make the NFC Championship Game during the 2008 season with the Eagles. He has also been a member of the Hartford Colonials, Houston Texans, Kansas City Chiefs, New York Giants, and Chicago Bears, where he had signed a three-year contract in 2017 but was released in 2018, having been placed on injured reserve after suffering a fractured forearm in Week 3 of the 2017 season.

While at Texas-El Paso, Demps earned first-team All-Conference USA honors as a senior in 2007, when he had a pair of 100-yard interception returns. He ranks second in school history with 17 interceptions.

Demps is also excited about taking classes at the same university where he’s coaching. This past year, he took a TEDS church history course under Professor Scott Manetsch, and he plans to invest even more time in the classroom by taking classes in biblical interpretation and in mental health counseling.

“I want to learn more about how to interpret the Bible well and more about counseling, so I can become better at discipling players on this team, as well as passing on that knowledge to others,” Demps said.

Athletic Director Heather Logue added that Demps will be a terrific addition to the coaching staff. “Coach Demps is a humble man of God who desires to make disciples and to help them strive for excellence on and off the field.”