Diary of a Quarantine Kid 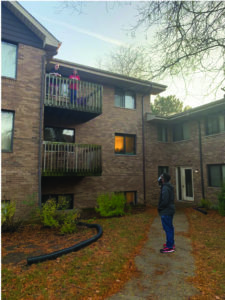 Today started off as any other week. Classes as normal, simple as that. Then the text came in around 10 a.m. Someone at my workplace tested positive and I would have to quarantine.

My suitemate, Jordyn Adams, walked in around that time. She saw the look on my face and knew.

It was Quarantine Time.

She and I spent the next hour getting our affairs in order. I quickly made my way to the Mac Lab to submit an assignment for my Graphic Design class (careful that no one else was around). I said goodbye to my mouse and keyboard, for I knew it would be a while until I saw them again. Afterward, Jordyn and I went off to the Sports Complex to get tested, but the nurse was already gone. With pounding hearts and chins held high, we made the trek back to our suite and locked ourselves inside.

It had been seven days since I had any contact with the person who tested positive, so we thankfully only had one week. We could survive one week.

Not going to lie . . . I woke up today more refreshed than I had been in a very long time. It was 8:15 a.m. and I didn’t feel exhausted or anxious about getting to class on time. I felt pretty relaxed. Fifteen minutes later I heard a knock at my suite door. I got out of bed to go check and I saw two breakfast bags at the door. That was right, Jordyn and I had signed up for breakfast meal drops. I grabbed Jordyn from her room, and she and I ate together. She said she hadn’t felt as rested as she did now in a very long time. Something good was coming out of this!

I knew hump day was a busy day for me, but I didn’t realize how busy it really was until I sat in one single spot staring at a screen for ten whole hours with only two one-hour breaks in between. It felt like I woke up, sat at my makeshift kitchen table, and never stood up again. I was in the Matrix, stuck in the land of screens . . . with no way out. If Morpheus came to me offering the red or blue pill, I would choose the red pill and escape in a heartbeat. Or would I choose the blue pill to live in a blissful ignorance utopia where I have no responsibilities? I wonder how many of my friends would get this reference . . . goodness, I was getting old already.

My endless Zoom loop, though still going strong, was interrupted by the CU event “Paint and Sip.” The painting kit they sent me gave me a wonderful way to multitask and keep myself awake during my night class. I honestly didn’t know how much I retained from that lecture, but at least I had a new painting to show off!

We feasted like queens in quarantine. It was lunch drop off and Jordyn and I expected the normal satisfactory food from whatever they were serving in Hawkins. When we opened the bags, though, what we laid our eyes on almost brought us to tears: the popcorn chicken bowls.

Our screams of joy could probably be heard from the grad side of campus. The delight rising up from the depths of our souls was overwhelming. After posting our reaction on Instagram, we heard from a few other quarantiners that they had reacted in the same way. The gleeful chorus arose all across campus that day amongst those in quarantine and isolation. It was the little things that made the biggest impact.

Jordyn and I got a “visitor.” Arthur Williams stopped by to say hello, and when I say ‘stopped by’ I mean the ‘stood outside in the cold while Jordyn and I stood out on our second floor balcony’ kind of stopped by. He tried to throw candy up to us, and it wasn’t a total failure . . . but let’s just say the people living below us got half of it. I didn’t even remember how long the three of us talked like that while slowly getting frostbite. But one thing I did know? It was much needed for all of us.

The days were beginning to blend into one long continuous period. I didn’t know when one day ended and another began. What did the sun look like again?

It was official. I was a vampire. I opened the blinds to remind myself of what the outside world looked like. The moment I did, a hiss came from my mouth before I quickly shut my blinds. By the time I emerged back into society I was certain I would be as pale as a ghost. Absolutely certain.

I stared intently at the large pile of brown paper bags in the corner of the living room. Two people, three meals a day. I thought I could make an entire fortress out of all the styrofoam and paper that we had on hand. Too bad it wasn’t these that were flying off the shelves due to the pandemic; I could have made a fortune if it were. But no, instead it was just a large pile of trash . . . a pile Jordyn and I needed to dispose of.

We had to go outside.

Here was the game plan. I would go out first with half the pile, and when I returned Jordyn would take the rest. We would make sure there was no one around and then book it. When the coast was finally clear, I went out. First couple of steps: no one in sight. Next couple steps: the coast was still clear. I turned the corner and saw the dumpster. I was almost there. Just a few more steps, and then success!

That was when I saw one of my friends.

They were coming out from Waybright, heading down the path directly toward me. My heart pounded in my chest. They hadn’t noticed me yet.

I ran as quickly as I could, barrelling into the side of the dumpster. I hurled the trash and ran back to my room before they could even see who I was. Mission accomplished.

I had to admit . . . the day had gone by in a blur. I barely remembered it at all. I think I did my homework . . . did I do my homework? I hope I did my homework. I had probably eaten at one point or another because Jordyn would never let me go a day without eating, but I didn’t remember that either.

The real question was this: if I did eat, was it actual food? Or just the snacks that Trinity left outside our door yesterday? Whatever. I was sure it was fine. I would just filter feed like Spongebob did in that episode from season three when he was injured and locked himself in his house. Yeah, that sounded pretty reasonable to me.

Today was the day.

The last day of quarantine.

It definitely felt like the longest day of quarantine, but I knew that was because I could see the light at the end of the tunnel. I kept reminding myself that I only needed to make it to 7 p.m., but time kept dragging on and on. Yet in the end, the clock finally struck 7 p.m. and in that moment, bundled up in our winter coats, hats, scarves, and gloves, Jordyn and I ran out of our suite and emerged from the halls of Madsen . . . free.