Building a Culture of Second Chances

For the 2.3 million individuals currently incarcerated in the United States in federal or state prisons, education can be a driving force in changing the trajectory of their lives and propelling them towards successful reentry into society following release. It’s one of the reasons Trinity International University (TIU) collaborated with the Wisconsin Inmate Education Association (WIEA) to establish an extension site inside Waupun Correctional Institution, a maximum-security prison with 1,250 inmates in Waupun, Wisconsin.

TIU offers a full-time, cohort-based, four-year Bachelor of Arts in Biblical Studies with a minor in Psychology to inmates who have already served three years and have at least seven years left of their sentence. The first graduation is set for this summer in July with 20 men expected to graduate from Trinity’s program.

“The seniors are looking ahead to their post-graduation plans with anticipation,” said Sharon Vaught from WIEA. “Some have remarked how this is the first time in their lives they’ve ever finished anything. For most, it’s the first time they’ve dreamt about their future.”

The new graduates become “field mentors” who are available to mentor other inmates either at the Waupun Correctional Institution or at other correctional institutions where they may relocate after completing the program.

Craig Long earned his PhD in New Testament Theological and Historical Studies at TEDS in 2013 and serves as Associate Dean of the Waupun Correctional Extension Site. He has been teaching at Waupun since fall 2017.

“The mixture of pastoral and academic work connects all my passions,” said Long. “I enjoy the missions-focused element of engaging in an environment where only a small percentage of the population proclaim a Christian faith. I have the opportunity to interact with biblical text and lay out the story of Christianity.”

For the men in the program, a college degree is a mark of tremendous accomplishment. “Over 70% of the inmates did not graduate from high school, but earned their high school equivalency while in prison,” explained Long. “Graduating will be a very significant victory and give them the skills to engage with those around them and make a kingdom impact.” 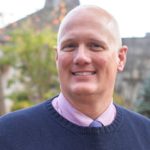 “Graduating will be a very significant victory and give inmates the skills to engage with those around them and make a kingdom impact.”

The Benefits of Higher Education and Values-Based Programs

Trinity recognizes the many ways values-based education can bring about changes in society as lives are transformed by the hope found in Christ. For the men released from prison, the goal is they’ll be a force for good in their families and neighborhoods and keep others from making the same mistake.

“Championing higher education in our criminal justice system is an idea all of higher education can embrace,” shares the Council for Christian Colleges & Universities (CCCU) President Shirley V. Hoogstra.“The positive effects for the prisoner, their families, and the wider community are clear and well-documented. In Matthew 25:36, Jesus says, ‘I needed clothes and you clothed me, I was sick and you looked after me, I was in prison and you came to visit me.’ An education recognizes the God-given dignity of all individuals. It provides a fresh start. And it provides the confidence to face a new future and look candidly at the past.”