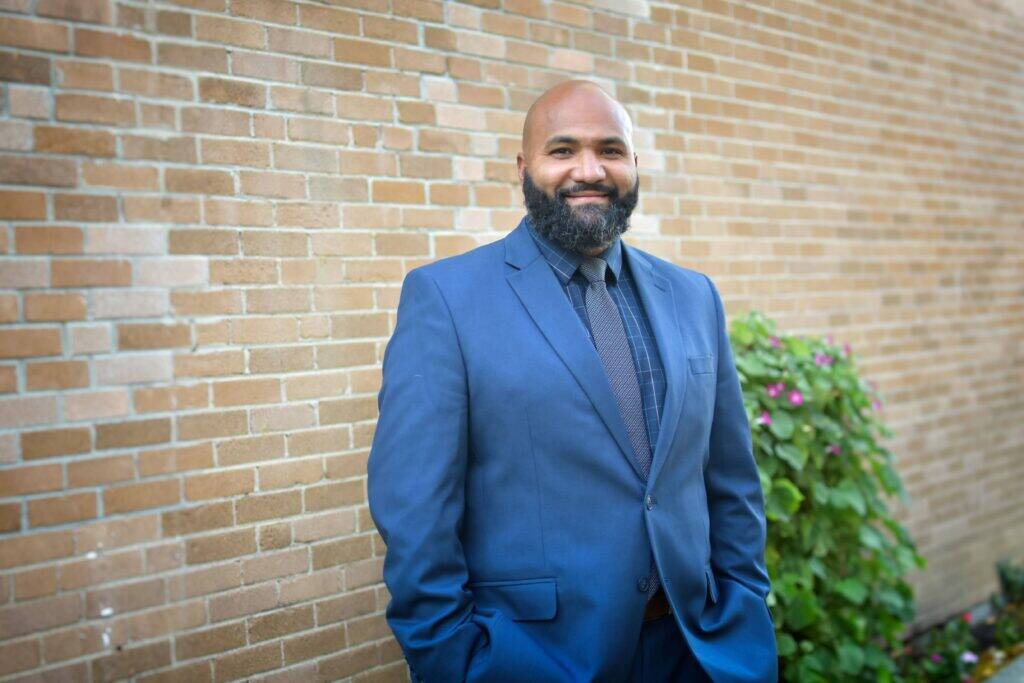 Oscar was recruited by Coach Leslie Frazier to play football at Trinity and for him, joining the team was his ticket out of a bad neighborhood in Miami, Florida. By his sophomore year, he was excelling in football- completing all his goals- but his life was missing something. He had neglected to spend time in God’s word and had ignored any spiritual development opportunity at Trinity.

When his father-figure died, Oscar’s life continued to spiral, yet various people in the community—his teammates, coaches, professors, and his barber—were praying for Oscar, showing him compassion, and demonstrating a good example of what it means to be a  Christian. One day during a chapel service, they sang “Knowing you Jesus,” and the Lord softened Oscar’s heart.

“I remember saying if all of this (Jesus’ life, death, and resurrection) is true, then I surrender. Lord, take away all this anger, all this pain, take all this away and do whatever you want with me.”

From that moment on, Oscar dedicated his life to Jesus Christ and a desire for a ministry of reconciliation was placed on his heart. “Therefore, if anyone is in Christ, he is a new creation. The old has passed away; behold, the new has come” (2 Corinthians 5:17).

“It was at Trinity that God really formed me and gave me a good foundation of what it means to be a disciple and how to engage God through Scripture and prayer.”

After his life was transformed, Oscar’s priorities shifted. He no longer wanted to pursue an accounting degree which he had originally, only chosen out of pride and a desire for a bigger paycheck. Instead, Oscar graduated from Trinity with a Bachelor’s degree in Elementary Education with an emphasis in mathematics in 2001.

So Oscar went back to teaching for two years until he was asked to sub in as dean, just for one day, but he did such a great job that he was asked to take on the role full-time.

“God has given me the ministry of reconciliation. Somehow, I was in a position where I knew things were wrong and needed to be made right.” Oscar asked God to show him a different way of leading in this new role.

At the time, Waukegan Public Schools had a bad reputation, with one of the highest suspension rates in Illinois. Oscar knew there was something wrong with the system. “It was very punitive. There was no restoration being done; no one had a voice. We were kicking kids out left and right, and our suspensions had skyrocketed.”

On the second day of school, two girls got into a big fight in the cafeteria, and Oscar knew this would be the school’s defining moment. That day, he decided not to suspend the girls, but to offer an alternative.

“We’re going to make sure these kids are supported, that there’s restoration and relationship…”

Oscar’s alternatives for suspension began to work and the news spread. Halfway through the school year, Oscar was asked to present his method to the Board of Education. By the end of the year, Miguel Juarez Middle School didn’t have any suspensions, and they were on track to lower their referrals to the principal’s office by 50%. Oscar says, “God brought the gospel to the school.”

While Oscar continues to serve as dean and also climate and cultural specialist at Miguel Juarez Middle School, he is also consulting with the high school and four other middle schools in the district.

Today, Oscar shows the love of Jesus to his students by listening to them, providing a chance for restoration, and praying for them. “When I step on campus, they have no idea that I’m praying for the whole campus. I’m praying for my students, my colleagues, and my boss.”

“All this is from God, who through Christ reconciled us to himself and gave us the ministry of reconciliation;  that is, in Christ, God was reconciling the world to himself, not counting their trespasses against them, and entrusting to us the message of reconciliation (2 Corinthians 5:18-19).

Trinity’s personal, practical, and biblical approach to a Christ-centered education provides you the opportunity to take the classes most interesting to you, rather than fulfill a list of requirements.

The Education Department’s annual teacher’s workshop is designed for classroom teachers at all levels who desire to learn strategies to effectively engage their learners and earn their professional development hours.