A New Path: Cooper Bryan’s Journey from Harvard to TEDS 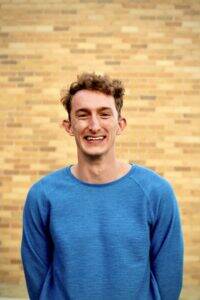 Cooper Bryan, a second-year Masters of Divinity student at TEDS, forged a new path to answer God’s calling for his life. Bryan moved to the United States from Ethiopia, where his family members were missionaries, and he began attending Harvard College, the undergraduate wing of Harvard University, studying economics with the hopes of doing research as a career. But God had other plans for him.

During his time in college, Bryan began attending and working with an on-campus organization called Harvard College Faith in Action. After going to their Bible studies and serving on their leadership team, Cooper realized there was more of a need for him in ministry than in finance. He began asking the Lord what all of that meant.

“I was wrestling with the idea that if I had been accepted to Harvard, then I was pressured to pursue economics or some other ‘prestigious’ vocation because I supposed that’s just what Harvard people do. Unintentionally, I’d subconsciously painted the church as a second option or a lesser calling.”

This caused Bryan to reflect and seek advice, “I had a friend say to me ‘School is for sanctification,’ and it made me think about who I have become since I have been at Harvard.” He realized that God has led him through everything for a reason, and he faithfully answered God’s call to attend Trinity where his father, Dr. Steve Bryan (MDiv ‘90, ThM ‘92) teaches New Testament courses. “I have been formed in a particular way, and I will take that formation and apply it to a divinity school setting.”

“One of the best elements of the TEDS community is the opportunity to learn, worship, laugh, and do life with Christians from all around the world.” 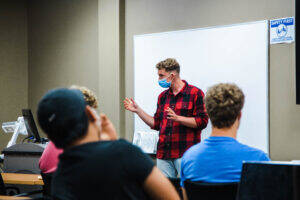 Now as an MDiv student, Bryan is building community among his peers as he serves as an RA for the graduate students who live on campus. The community here is something that Bryan is most thankful for.

“One of the best elements of the TEDS community is the opportunity to learn, worship, laugh, and do life with Christians from all around the world,” Bryan said. “It’s a beautiful embodiment of a holistic vision of the Church.”

In the classroom, Bryan continues to grow in his faith. “In the early church, the “Rule of Faith” provided an ecumenical rule for interpreting Scripture. The TEDS faculty embody this same sentiment as they think deeply about how to exercise bounded theological dexterity. At TEDS, I have the freedom to wrestle with essential questions while practicing a robust historically-Christian orthodoxy.”

Bryan is able to apply what he has learned as he is mentoring the advanced BA/MDiv students by teaching an Introduction to Greek course. Upon the completion of his MDiv, Bryan hopes to pursue doctoral studies so that he can continue teaching.

At Trinity, students have a number of opportunities to grow academically, spiritually, and professionally. Learn more about our MDiv program: